You are about to read the story of Lucy Musimbi, a 41-year-old mother of twins, who joined the Village Enterprise program in January 2019. Her story told originally in Swahili, has been translated into English with minor grammatical edits.

Like many other single mothers in rural Kenya, Lucy faced the daunting task of fending for herself and her two young children while unemployed and living in extreme poverty. As a result, she struggled to find food, medicine, and other basic necessities critical for the health, well-being, and survival of her family.

The mortality rate for children under five in Kenya stands at 43.2 children per 1,000 live births. Additionally, one out of three children under the age of five is physically stunted, a sign of chronic malnutrition. Socio-economic status is a crucial determinant of survival; children in the lowest wealth quintile are 44% more likely to die before the age of five than those in the highest quintile.

More than four million women in Kenya live in extreme poverty—nearly 8% of the country’s population. Lucy represents the one in three women aged 18 to 60 in Sub-Saharan Africa who are single mothers.

This is her story. 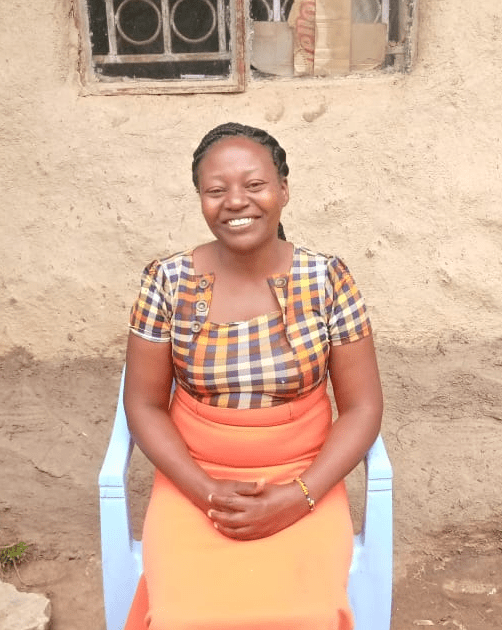 My name is Lucy Musimbi.

Before Village Enterprise came to my village in Ndalu, I was pregnant and living a life without hope. Every day was a struggle. I had no means of income after my husband abandoned me during my pregnancy. When it was time for delivery, I sent word to him, hoping that he would be touched to change. But when he saw that I was having twins, he told me that all I know is how to give birth but not how to pay school fees. He left, and I never saw or heard him again.

Life became so hard. My neighbor was a big help as she let me leave the babies with her while I set out early in the day looking for work. I worked as a farmhand and sometimes washed people’s clothes, but it was never enough. Food was the biggest challenge – even as I breastfed, sometimes all I had to eat for days was boiled water without sugar.

Village Enterprise picked me up from the garbage. When I joined the program, I felt like I witnessed a miracle. Not only were they teaching us how to use our talents for business, but they were also giving us the money to start, and it was not a loan we had to pay back. I did not believe that my simple skill of sewing and making beads would change my life and the lives of my children forever, but it did.

Through the training, I was able to teach other women how to do bead-making. I learned about saving with a purpose. It is from those savings that I bought chairs and cooking utensils for my house, items I never previously owned. Through the program and my business, my babies are healthy and eating. I no longer stay up at night wondering how I will pay for their school fees.

Village Enterprise did not just save me, they also saved my children and gave them a chance for a better future. I am forever grateful to them.