In a post-industrialized world, nations that contributed the least toward carbon emissions are disproportionately impacted by climate change. Shifts in seasonal weather, increases in droughts and floods, and decreases in annual rainfall have meant that developing nations, whose main industries rely on agricultural output, are put at a further disadvantage.

In Kenya, agriculture is considered the most important segment of the economy—especially in West Pokot County, where it accounts for 84% of household income. However, 69% of the population in West Pokot already live below the poverty line. Women and girls living in extreme poverty in arid and semi-arid regions that depend on agriculture such as West Pokot are some of the most vulnerable populations facing threats from climate change. 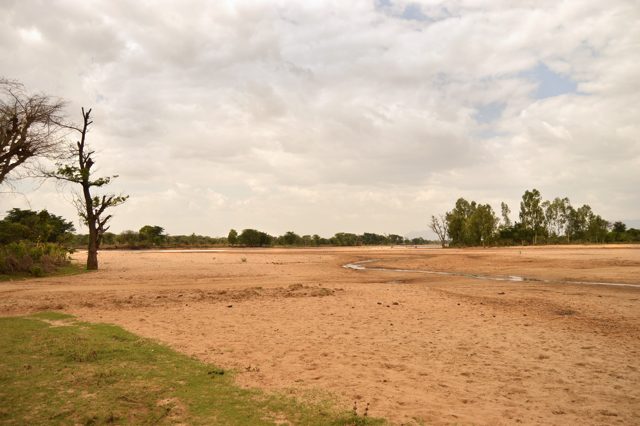 Above: The Suam River, located in Western Kenya along the Ugandan border, is a major resource for local communities. Year after year, these communities have seen significant decreases in water-levels, impacting their day to day life and ability to earn a living.

“If climate change isn’t addressed, individuals in the agricultural sector will lose their livelihoods, and in an effort to ensure their children are taken care of and well fed, many of them will pressure their girls into child marriage,” explains Nelly Munge, Technical Advisor Gender, Youth and Social Inclusion at Village Enterprise. “There are other risks as well. Often in regions like West Pokot, girls are forced to drop out of school to find water, and women and girls who are forced to migrate because of climate change will face an increased risk of violence.”

Kenyan women account for 75% of the labor force in small-scale agriculture, yet they have access to less than 10% of available credit and less than 1% of agricultural credit. “The majority of women farmers have been left out of both grassroots and national-level climate adaptation discussions,” says Nelly Munge. “Women farmers experience critical barriers to climate adaptation such as lack of credit and savings, as well as a lack of knowledge and training about climate-smart adaptations.”

Because of culturally-derived gender inequality in the region, the majority of men find less labor intensive work as security guards or supervisors. Although lesser in numbers, male farmers are better positioned than female farmers to adapt climate-friendly practices as they have greater access to appropriate information, training, and resources. In times of drought, men can more easily leave their homes to find alternative sources of income while women typically have more household responsibilities such as raising children and tending to the home.

This was the case for Roserlyne, Faith, and Eliza, of Parasenta village in West Pokot until March of 2021 when they were selected for an adapted version of the Village Enterprise graduation program, called the Women Economic Empowerment through Climate-Smart Agriculture Project. Funded by Korea International Cooperation Agency (KOICA) and in partnership with UNWomen and the Food and Agriculture Organization of the United Nations (FAO), the project aims to enhance the capacity of West Pokot county officials to develop gender-sensitive and climate-smart policies and to increase household income for women in the agricultural value chain using modern farming technologies that are climate-smart. 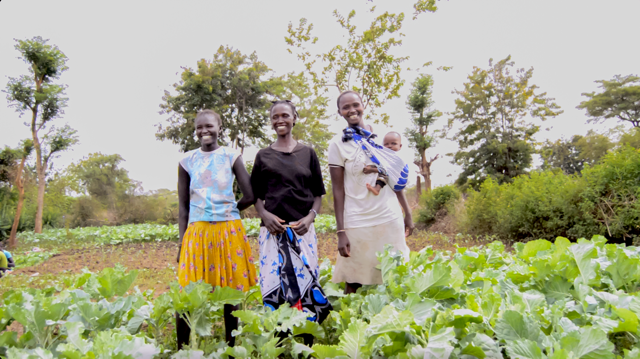 Eliza, Faith, and Roserlyne were three of more than 800 people living in extreme poverty in West Pokot who were identified by Village Enterprise to start sustainable agribusinesses. Of these 809 entrepreneurs, 80% of them were women. On top of receiving training from Village Enterprise to start their businesses and $180 as a seed investment, entrepreneurs received training on climate-smart agriculture from FAO. Entrepreneurs learned about techniques to improve agricultural outputs in a changing farming environment such as proper irrigation, planting drought tolerant crops, and moisture retention practices. For Roserlyne, Faith, and Eliza, these trainings meant they now knew how to implement climate-smart techniques throughout the entire agricultural value chain, and they shared that these methods have also increased the quality of their produce.

To approach the topic of climate-change adaptations with a holistic lens, Village Enterprise is also working to address gender, youth, and social dynamics. As part of our poverty graduation model, each business is part of a business savings group of 10 businesses that gives the entrepreneurs access to growth capital and a safe place for their savings. The business savings groups also serve as safe spaces for women to share any issues, learn from one another, and find support, demonstrating increased confidence and leadership skills. Faith shared that through this group they are “now able to lift each other’s lives.” 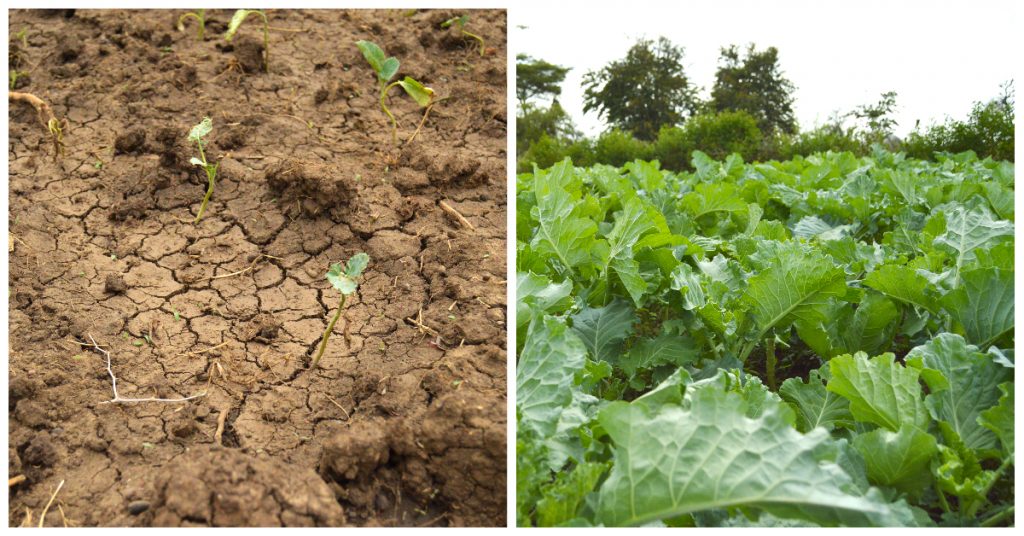 Above: Adaptations in agricultural practices are becoming increasingly vital for West Pokot farmers to cope with changing climate conditions. The photo on the left shows the difficult conditions farmers are attempting to grow crops in. The photo on the right shows the crops of Village Enterprise entrepreneurs. Through trainings provided by FAO, entrepreneurs are learning techniques to improve their crops in a changing farming environment.

While women and youth participants are becoming more aware of the different opportunities for them to participate in climate-smart agriculture, male spouses are increasing support over their newfound household income. Eliza spoke of how her relationship with her spouse has greatly improved because she can now afford to put food on the table for the entire family, noting “it feels good to have your own money as a woman.” Through financial literacy and gender empowerment training, entrepreneurs have reported a decrease in household gender-based violence.

Within a year, Roserlyne, Faith, and Eliza have collectively saved over 80,000 Kenyan shillings ($691 USD), purchased goats and chickens for their home, sent all of their children to school, and Faith even purchased a mattress so she no longer has to sleep on the floor. In total, this project is estimated to directly impact the lives of 2,400 people. And with support from Village Enterprise, the West Pokot County Government has formulated two policies to address issues of climate mitigation and financing of climate change interventions. These policies, acting as catalysts of cultural and behavioral changes, will change the course of history for West Pokot women, girls, and climate for generations to come.