Village Enterprise was featured in an OZY article on farming mobile innovations. Check out the story below: 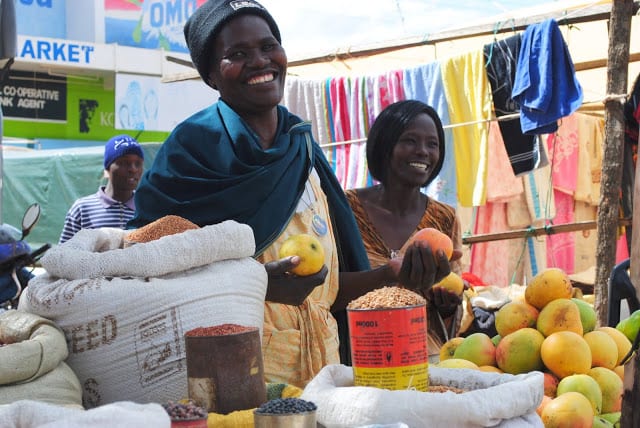 For more than two centuries, The Old Farmer’s Almanac seemed to hold the answer to every crop grower’s questions, like when is the best time to plant onions (“as soon as the ground can be worked in the spring”) or harvest potatoes (“after 10 weeks, usually in early July”).

Agnes Mwaki prefers to use an app. After the 49-year-old banana farmer in Meru County, Kenya, recently switched to growing onions — a more profitable crop — she needed help determining when to transplant the seedlings and when to harvest. Through a government program that provides her with a smartphone, Mwaki now uses WhatsApp to send a photo of her onions each week to an agronomist. “When I spot a problem, I just take a photo and send it to the agricultural officer, and she describes the drug [I’m] supposed to use and I buy it,” says Mwaki.

In recent years a growing group of mobile apps has moved in with access to real-time advice and market intelligence, and the latest of that technology is originating where this kind of data is increasingly vital: Africa. By 2050, the continent must boost its current food production by 260 percent to feed the estimated 2.4 billion people who will be living there, warns the U.N.’s Food and Agriculture Organization. Yet many farmers there are unaware of the actual market price of certain crops like rice, which could lead them to sell their harvests for peanuts and fall financially short ahead of the next growing season. Even worse: They’re unlikely to know that they could have doubled their profit if they had just ditched their rice patties and started growing maize instead.

Enter a suite of mobile apps that is addressing everything from how best to feed farm animals to displaying the going rate of seeds or fertilizer and projecting the most profitable crops during a particular season. M-Farm lets farmers text message a phone number to receive up-to-the-hour prices on tomatoes in Nairobi, for example, while iCow offers tips on how to maximize profit and productivity from raising cattle (“Napier grass is best,” reads one tip). While these kinds of apps aren’t entirely new, there are more of them now, and many are becoming increasingly sophisticated as well as being developed and used within Africa. (Both M-Farm and iCow emerged from Kenya.)

One new tool being introduced in Kenya and Uganda allows users to analyze a particular crop — such as cassava tubers — and compare its profitability level to others. “We started noticing that a lot of our farmers were essentially planting crops at the worst times of the year, when everyone was harvesting or planting the same exact crops, because that’s what their neighbors did,” says Konstantin Zvereff, a developer who worked on the Smarter Market Analysis Risk Tool, or SMART. “When you have these low incomes, you can’t afford to take risks.”

Given that many farmers live on less than $1.25 a day, this kind of app could help a family afford to pay school fees or send their kids to a doctor. But the app alone isn’t always enough. That’s why Village Enterprise, the San Francisco-based nonprofit behind the app, is also using a four-month training program where farmers learn how to make use of their competitive advantages in deciding what and how to plant before they get help creating a business plan. Already in Uganda, Village Enterprise succeeded at persuading farmers that growing maize would be far more profitable than raising honey because of low demands for the latter.

As cellphones became commonplace here, farmers started calling friends or relatives at distant markets to determine the demand for certain crops in those particular areas. Yet now the race is on to develop apps that can do the same — across many agricultural products, at hundreds of retail locations and with input from thousands of buyers and sellers.

To be sure, some industry experts argue that the apps are wrongly focusing on things like scaling production rather than on what farmers are really thinking about day to day: reducing costs. And like many new ideas, ag apps that threaten to change a farmer’s way of life too drastically, and too quickly, can face resistance. In the U.S., farmers often resist change because of arcane agricultural subsidies that are worth hundreds of billions of dollars and underwrite the production costs of unprofitable crops. In East Africa, an older generation also remains hesitant. Software developer Tony Olendo’s grandfather, for one, was shown M-Farm and how it could have helped him select the most profitable crops. But he didn’t budge. “He’s been farming for close to 40 years now,” says Olendo. “This took his kids all the way through school, so it’s very difficult for him to imagine that he should now stop.”

To convince people like his grandfather to change, Olendo says developers must go “outside the laboratory environment that they’re used to” and hold a farmer’s hand while walking through the entire process — from how to till the land to where to buy fertilizer.

Banks may ultimately embrace this technology without reservation, because farming at any reasonable scale typically requires some manner of loan or credit. “One of the biggest challenges farmers face is lack of a credit history,” says Robin Miller, associate partner at Dalberg, a global strategic advisory firm. “Banks are too fearful to provide those loans without knowing the risk associated with how that person will use it.”

But data from thousan 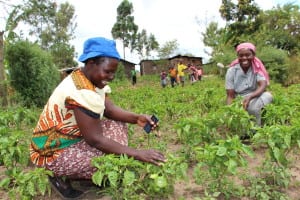 ds of people using ag apps provides records of how farmers make their decisions — and their returns. And conceivably, Miller adds, a bank that buys access to that data would have a better picture of a farmer’s profile and for deciding whether or not to offer a loan — and, perhaps, help a farm scale to the next level.