Last month our US team embarked on a five-day journey to “Live on Less;” spending less than $1.90 USD on food and drink each day.  Our goal was twofold: 1) to raise awareness and inspire conversation surrounding global poverty and 2) to stand in solidarity with the millions of people living below the extreme poverty line. We recognized at the onset that these five days would barely touch upon the reality of life in extreme poverty, but underestimated our ignorance in attempting to simulate even the caloric conditions of poverty.  For an office fueled by rice chips and dried mangoes, we had prepared ourselves for the “hanger” that would inevitably set in after a single day of carefully portioned rice, beans, and oatmeal.  However, while the rice and beans quickly lost their appeal, the week became less a physical challenge and more a reflection on the unseen luxuries of our day-to-day lives.

The luxury of convenience

As I sat in traffic en route to the office on Day 1 of the challenge, I racked my brain for exit strategies.  We’d just returned from two weeks in Kenya, I had a big deadline at work, I was training for a marathon, and most importantly, I was headed to Atlanta for my sister’s graduation and feared missing out on the city’s buzzing food scene. “This just isn’t a good week for me to do this,” I thought to myself.  I hadn’t even stomached the first meal of the challenge and I wanted a way out. But as I sat out another hour of Bay Area traffic, I reflected on my own absurdity. Poverty isn’t a matter of convenience, it’s not something you plan for, or fit into your schedule.  Poverty is a constant; it’s a vicious cycle of uncertainty and focus on surviving each day.

The luxury of bulk 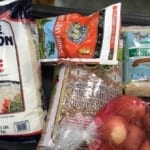 the challenge turned into a numbers game as we calculated our weekly allowance ($9.50) and pooled our funds together for a Costco run ahead of time. As we gathered to share our first lunch together, we exchanged wary looks as we contemplated the heaping pile of rice and beans in front of us. What we realized in that moment was the luxury of purchasing in bulk. While buying en masse may ultimately be less expensive, life in extreme poverty rarely grants the fortune of fronting such a large sum of money, despite net savings. Rather, it is often more feasible to purchase smaller amounts as money becomes available.  Despite the best of intentions, we had failed to take this minor reality into account and ended up with more food than our stomachs could handle.  So rather than suffering from hunger, our bodies struggled to adapt to the carb-heavy diet.

While the challenge was not the hunger-inducing physiologic 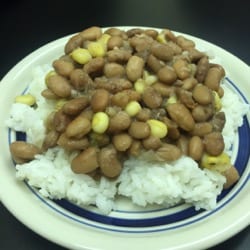 al experience we’d anticipated, it was an opportunity to reflect on the simple realities of our lives that we take for granted. It was a chance to come together and share meals, to reflect upon how little we truly understand about what it means to live in extreme poverty.  As we continued with our daily lives throughout the challenge and afterwards – driving our cars, getting our hair cut, going to the dentist, flying across the country for graduations – we became increasingly aware of the routine luxuries of our lives. So what do we do with this realization?  For us at Village Enterprise, it’s why we’re all here – because we believe that extreme poverty for all can be eradicated in our lifetime.  And while a diet of rice and beans wont reverse global inequality, it’s a small reminder of what we’re working towards.