While seeking to best develop our program delivery and monitoring solutions on the livestock business, the Ugandan country office based in Soroti launched the livestock tagging pilot process that kicked off on the 8th of May 2013 in Katine and the 9th of May in Katakwi. Eventually, this process will be rolled out in all of our areas of operation. 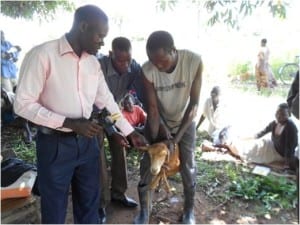 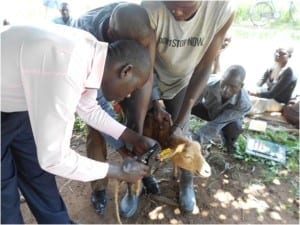 The livestock tagging process leverages the Business Savings Groups (BSGs), mobilizing them outside of their normal role as a community savings group. During the pilot three BSGs were included: Dongo Bino, Ooti Anyim, and Otie Kede Gen. These represented a total of 90 business owners. Interestingly, something that seemed to us so technical and difficult to do ended up to be a simple process and a great success! Initially we had planned to outsource expertise for the process. Instead, every staff member was able to tag at least one animal and this was the most exiting of all. I am proud to report the success of the whole process, having tagged a total of 87 heads of animals in just one and a half hours during the first day of tagging held in Katine! The next day in Katakwi we were even more efficient.

From the Business Mentors

Catherine Ameso said in her closing remarks that the tagging process is going to make her job as a mentor easier. She noted that the identification of animals is no longer going to be a problem and that she does not expect any business owner to present an animal without a Village Enterprise tag.

Esther Apolot in her address encouraged the business owners to take very good care of their animals in terms of treatment and spraying. She also reported during the bi-weekly meeting of the Business Mentors that she had a number of business owners coming from various villages where she had previously worked to visit her at her home. Their main reason for the visit was to ask why their animals were left out in the tagging process. To her, this signified an overwhelming number of people interested in the process.

From the Business Owners

Our business owners feel the tagging process acts as a security measure for their animals. Now they can easily identify them. No one will steal from them because everybody in the village will know that these animals belong to only individuals participating in Village Enterprise program.

One business owner stood up and expressed how exited he was to see all of their goats, sheep, and pigs bearing tags. He said “we have been seeing tagged animals in other places and they looked special and I wondered how I could ever get access to such special animals but here I am, it’s the first of its kind!”