When you walk into Mugomari village, in rural western Kenya, you cannot fail to realize the smile on people’s faces as they walk in small groups bringing themselves up to speed with the previous day’s news from Kenya’s capital, Nairobi. These smiles are out of satisfaction after having a meal at Mama Jane’s food kiosk. Mama Jane’s food validates the saying that the way to a man’s’ heart is through his stomach. 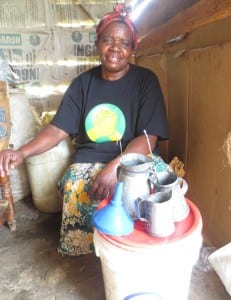 She and her fellow group members went through a three month Financial and Business literacy training, then received a startup capital grant of $100 from Village Enterprise. After three months of successfully running the kerosene business, the group received an additional grant of $50 to boost their business.

Jane’s average day is a busy one. She wakes up at 5:00 a.m. to make mandazis (donuts) which are a favored delicacy among the residents of this village.

At about 6.00 a.m. people begin to stream in to get a hold of the mandazis before Jane runs out of stock. Once the light of the day breaks, it gets a little less busy for Jane as she begins to prepare what her customers will take for lunch.

As part of being in the Village Enterprise program, Jane and ten other groups that received a similar startup capital had to come together to form a Business Savings Group. The group met every single month to save the little profit that they were making from their businesses.

As time progressed, Jane took up a loan from the Business Savings Group to expand her business which eventually bore fruit while the other group members diversified into other businesses. In addition to this business, Jane operates a kiosk that sells items such as sugar, tea leaves, bread, snacks, and sweets.

Jane says that she will forever be grateful to Village Enterprise for their involvement in poverty alleviation among rural poor households. She hopes that the extreme poor in rural western Kenya will continue to have their lives changed as hers has been changed.

“Sleeping without a meal and children staying out of school is a thing of the past,” Jane, who supports a household of ten, says with a bold smile on her face. This smile is shared by the hundreds of satisfied customers who eat at Jane’s food kiosk.

Jane is a perfect example of how we are making Village Enterprise’s mission of equipping people living in extreme poverty with resources to create sustainable businesses come to pass.